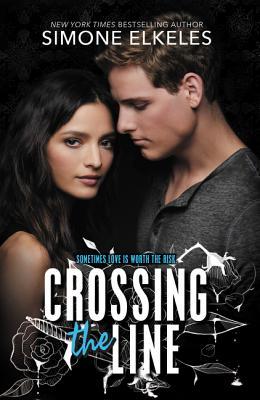 Crossing the Line by Simone Elkeles

I have *loved* other Simone Elkeles’ books and was thrilled to see this one was out. I was excited about the inclusion of Mexico and the cartel in YA fiction, with the reversal of an American going to Mexico instead of the other way around. But…

I was really disappointed. 3/5 stars. And that might be generous.

The Spanish phrases were completely wrong (come on! there are so many Spanish speakers you could have consulted!) and interrupted the flow in a way that detracted rather than added to the book (which you know has to be bad for me to think so, given how much I love Spanish). Also, I might be wrong but the girl on the cover does not look Latina…

A lot of the book, especially the dialogue, felt awkward, cliche, and already-done. The ending, without going into any detail, was stupid and ill-fitting. Most of it was contrived and unnecessary.

While many of her books are insta-lovey (boy sees girl or vice versa and falls in love instantly), this one was the same but in the bad way. Perhaps it was because I didn’t care too much about the characters — in fact, I’m not even sure I know who they are. Dalila doesn’t have any real desires or passions, which is part of what makes the ending unsatisfactory — there is no need to fill. They’re also really stupid, and not in the endearing way.

The relationship between the two wasn’t healthy either. It goes from hate to “love” very quickly. Lying is forgiven without batting an eye. They are so cliche and seem to like the idea of each other more than each other — ie I get the feeling that because Dalila likes to break rules and she isn’t supposed to be with him, that’s a big part of the attraction.  This would have been okay if the characters, and their relationships, were more complex than this.

If you’re looking for a good romance, try one of Elkeles’ earlier books, but not this one.

One thought on “Review of Crossing the Line by Simone Elkeles”