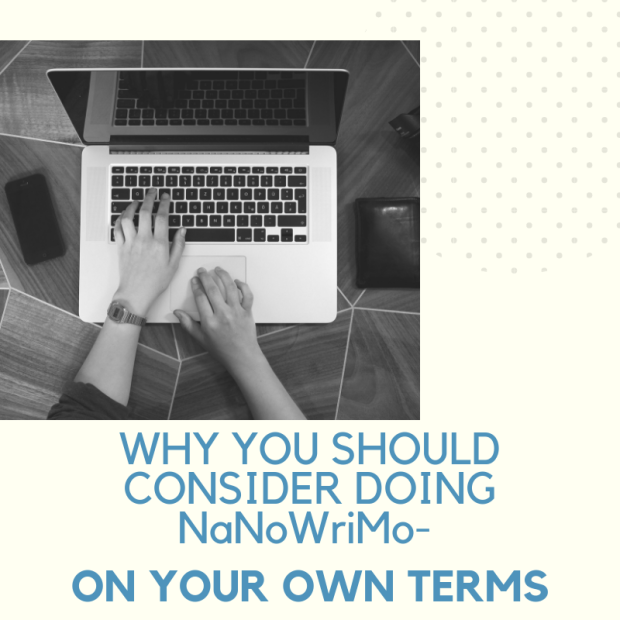 NaNoWriMo is National Novel Writing Month and occurs in November. During the month, many authors set out to start and finish a 50,000 word draft of a novel. You can set up an account to compete to win prizes, or just use it as a motivator to write more than you normally do. There is lots of support and discussion on social media while it is going on. Thus, participating can be advantageous in a lot of ways, as long as it is meeting the goals you want to meet.

Just because November is National Novel Writing Month (NaNoWriMo), doesn’t mean November is suddenly free from all other responsibilities.

(Although that would be great- anyone know who to talk to in order to make this happen?)

Even though some people may be able to carve out hours into their day to write (or write fast enough to spit out a novel in a month), that doesn’t mean you can (or have to).

Frankly, one of the main constraints most writers talk about is having enough time. If you don’t have the time or whatnot to write a book in a month (as many people don’t), you don’t have to set yourself up to fail by making that your goal. Instead, pick a word/page/chapter count that is more realistic and make that your goal.

You may be in the middle of another project.

I know many writers who wanted to do NaNo but are currently editing their WIP (work in progress). That doesn’t mean you have to ditch the editing for a month (unless you want to- it can be great to set your work aside for a month and come back to it with fresh eyes). Instead, pick a goal that is editing related, or publishing related, or related to whatever stage you are at.

One positive aspect about NaNo, and why it works so well for many people is the psych principle of the “new year” effect. In essence, the reason we do New Year’s resolutions is because it gives us a clear boundary between our “old” self and “new” self- allowing for self-reflection and the perception of a clean slate. Although many don’t endure long-term, some do, and it is a great impetus for change for many people as it gives them the idea of a fresh start and the opportunity to change their day-to-day (or at least reflect on it). (Also, bonus, you can use this any time- just tell yourself today is a new day and use it to spark something new).

Writing quickly to finish can be a great motivator, but it doesn’t have to be your style or goal.

I know many people like to just “get the first draft done” and that you “can’t edit a blank page” but I also know that having to rewrite the entire book because the first draft was so bad is not a fun situation (I’ve done that for both of my books). If that isn’t your style, don’t feel like you have to write that way. (You can also do heavy outlining beforehand to minimize some of this, if you are a “plotter”).

There are many ways of measuring progress, including for editing, and other stages of novel writing.

As I mentioned above, pick a goal that is helpful and relevant to where you are now and where you want to be. Pick what aspects of editing you want done by the end of the month or to where in the book do you want to be through with edits or what draft round you’d like to be on.

If this is your first book, it likely will take longer than you expect (and that’s okay). It’s great to have lofty goals but also to keep realistic expectations (or more manageable secondary goals).

Some people write the first draft of their first book during NaNo (which is great!) but many do not. Use it to give you that push if you are stuck, but be kind to yourself as to how much you can really expect to do in a month (and if you surpass it, great!).

One thought on “Why You Should Consider Doing NaNoWriMo, On Your Own Terms”