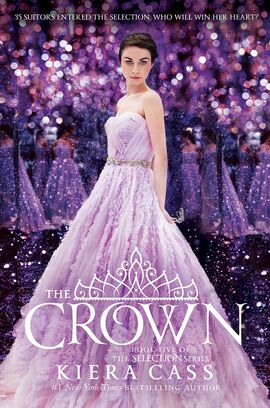 Having devoured the first four books of The Selection, I was excited to read the final book by Kiera Cass, The Crown.

Premise (no spoilers) for those who have not been lucky enough to read any of the series: The Selection books are YA dystopian fantasy and romance where princes (and in The Crown, a princess) find their future spouse through a process called The Selection. Like the Bachelor, contestants are chosen from across the country and compete to marry into the royal family. Eadlyn, the princess protagonist, must find love among the suitors as they are the only ones she can choose from to marry.

From the first line, I knew this was going to be a great book: “‘I’m sorry,’ I said, bracing myself for the inevitable backlash.” Like any good hook, I immediately had lots of questions, but it was not cliche nor was it promising so much I would later be disappointed. The tension was already starting to mount as I wanted to know right away what kind of backlash was happening and why Eadlyn was apologizing.

Another thing that impressed me about Cass’s writing style was her ability to differentiate between the boys in the Selection simply by the way they presented flowers to Eadlyn (the princess). This was such a simple thing and, yet, showed so much about them and how they contrasted each other.

Similarly, the body language throughout the book was really well done and clearly showed the intended emotions. For example, she “pursed her lips together, clearly determined not to laugh.” In one sentence, I could not only see how she was acting, I could also feel the mood and relate to it, as we all have been in situations where we want to laugh but cannot. (And how much harder it is to laugh when you shouldn’t be laughing!)

One thing that was quite satisfying as a reader was when the plot hinted at conflict before making it a conflict. (I won’t tell you what it is exactly in the novel in case you haven’t read it yet.) It made me feel insightful as well as eager to keep reading to ensure my predication would come true. This is especially true when an author hints at love interests, but keeps the characters from acting on their feelings. Even without this hinting, there was the right amount of tension- just enough to make me keep reading, but not so much that I was exhausted. This was aided, in part, by the right amount of interspersed humor.

I only had a few issues with the book. The first was, while I enjoyed the creative names, some of them were a little too obscure so I had to stop to pronounce them (like Eikko Koskinen). Secondly, Eadlyn was portrayed as a stubborn and strong-willed but she seemed to cry more than anything. I think there were definitely times where crying would be an acceptable response from anyone, but there were other times where I think her emotions could have been described without her shedding tears. Finally, I didn’t connect as much with Eadlyn as I did with America in the initial books, but I still enjoyed the novel.

Overall, I think this was an excellent book and I highly recommend it (after reading the first four, of course). I do think the original books are better, mostly because I got attached to the main character, America Singer.

Have you read any of The Selection series? If so, comment below.

If you found this helpful, subscribe to my blog!

Links if you want to learn more:

The Selection Wiki (has spoilers): http://theselection.wikia.com/wiki/The_Selection_Wiki

One thought on “Review of The Crown by Kiera Cass”